Documentation: Version 19.3
Print
The Panorama QC folder is designed to help labs perform QC of their instruments and reagents over time. Runs are uploaded using the data pipeline or imported directly from skyline.

The QC Plots web part shows one graph per precursor by default. The web part header allows you to specify a number of options, including selecting one or more type of plot using checkboxes. Hover over a plot name to learn more. This topic uses the default Levey-Jennings plot to illustrate features.

Each type of plot can be shown for the following metrics:

Premium Features AvailablePanorama Partners Program members have access to premium features within Panorama, including the ability to control which metrics are available for plotting, customize the definition and scope of available metrics, and subscribe to notifications when outliers may indicate an instrument problem. Premium subscribers can learn more in these topics:
Learn more about the Panorama Partners Program 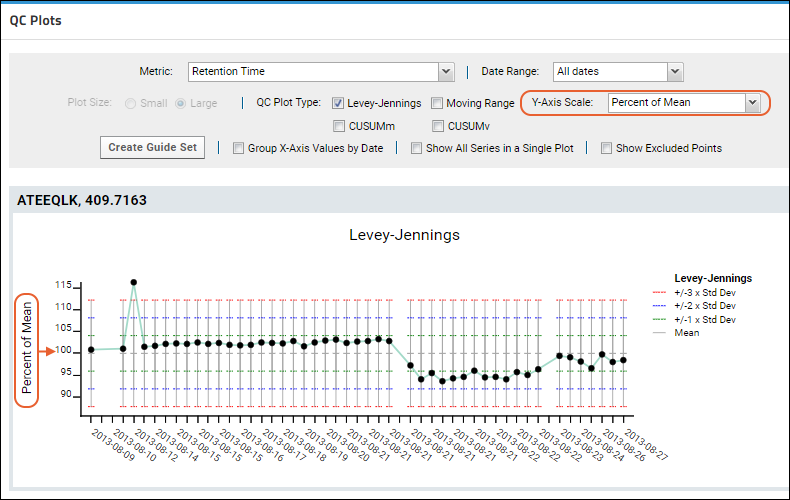 There are four isotopologue metrics that will be available when there is data they can use: Isotopologues are molecules that differ from each other solely by their isotopic composition. They are valuable in mass spectrometry because it’s possible to create variants of the same peptide with different masses. These isotopologues can then be added at different concentrations in a single sample, allowing for calibration curve for a peptide in a single sample (and therefore single run of the mass spec). Other common calibration curve approaches require separate samples for each concentration of a single peptide.Users want to use these isotopologue samples for QC and system suitability purposes. By monitoring the limit of quantitation (LOQ), limit of detection (LOD), and other metrics, a user can gain insight into the performance of the instrument and the dynamic range it’s accurately measuring.Skyline provides the ability to populate attributes on data elements like precursors and peptides with calculated values. The isotopologue metrics are used in conjunction with AutoQC to provide automated system suitability monitoring in Panorama. Specifically, the isotopologue elements are shown when there are annotations on a PrecursorChromInfo data element (captured in the targetedms.precursorchrominfo table during import) with the names “LOD”, “LOQ”, “PrecursorAccuracy”, and “RSquared”. 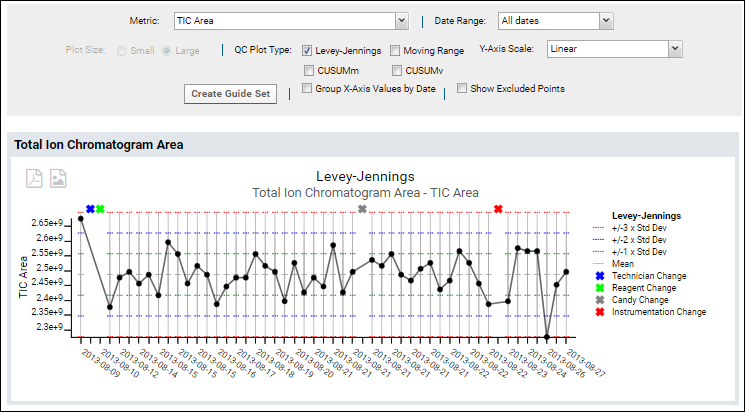 To show both precursor and fragment values in the same plot, select the metric option Transition/Precursor Areas. 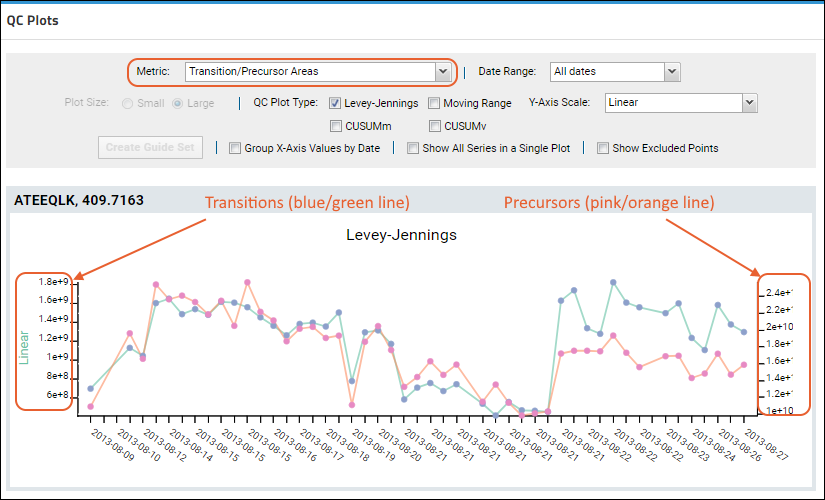 The plot is more complex when all fragments are shown. Use the legend for reference, noting that long peptide names are abbreviated. Hover over a truncated name to see the full peptide name. 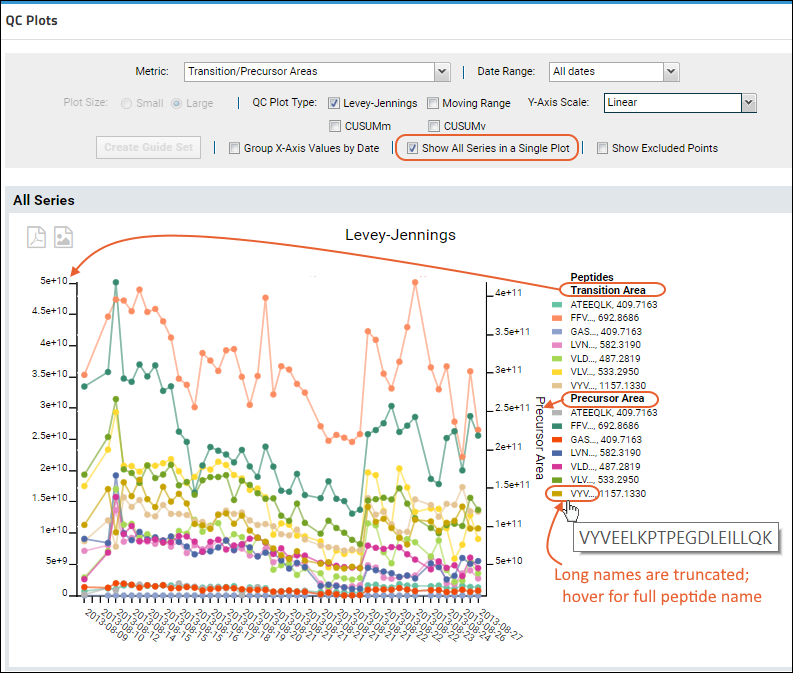 Hovering over a point in the graph will open a tool tip with additional information about that data point. 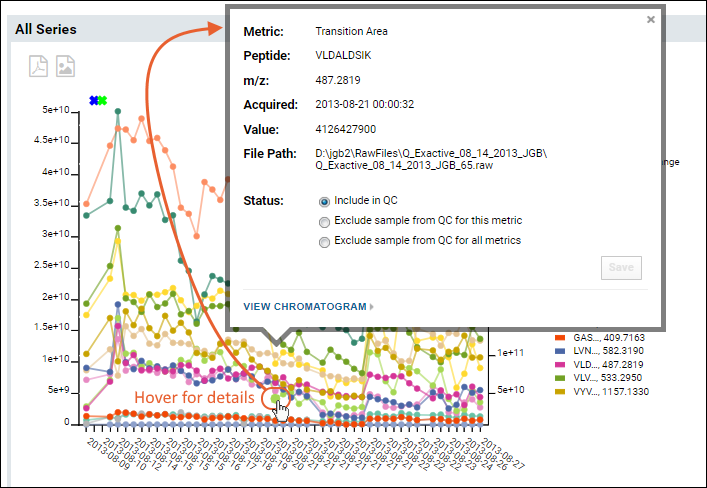 In the Status section of the tooltip, you can select an exclusion option if needed, such as for an outlier data point. Elect either of the following options to do so: Excluded data points are left out of the guide set range calculations and QC outlier counts for the QC summary panel and Pareto plots. Outlier samples can also be excluded from QC by entering the replicate annotation "ignore_in_QC" from the Skyline app, which will cause the sample to be excluded from all metrics.When a sample has been excluded, the QC dashboard hover information will note "not included in QC". 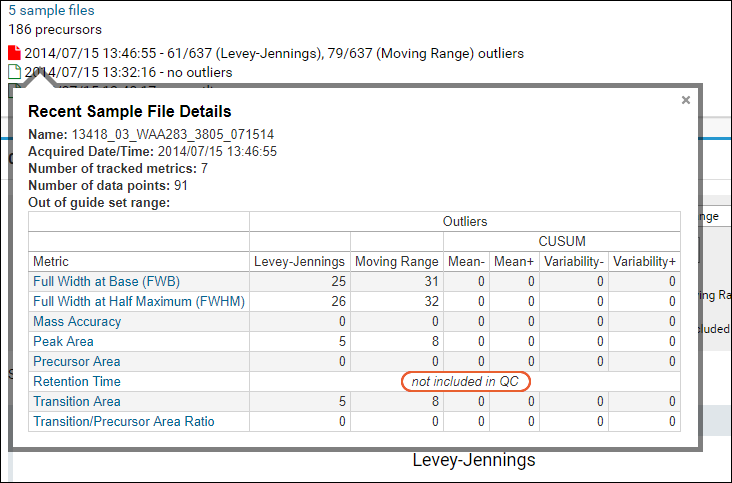 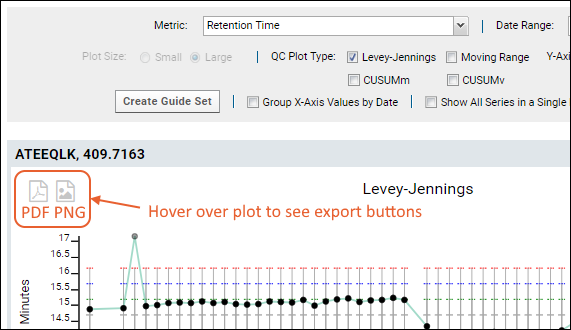 The next time the user views the plots on the dashboard, they will see the same metric they were most recently viewing. Persisted values are metric, y-axis scale, group x-axis checkbox, and show single plot checkbox. The start and end dates previously selected do not persist, as it is most useful to come back to the full range. 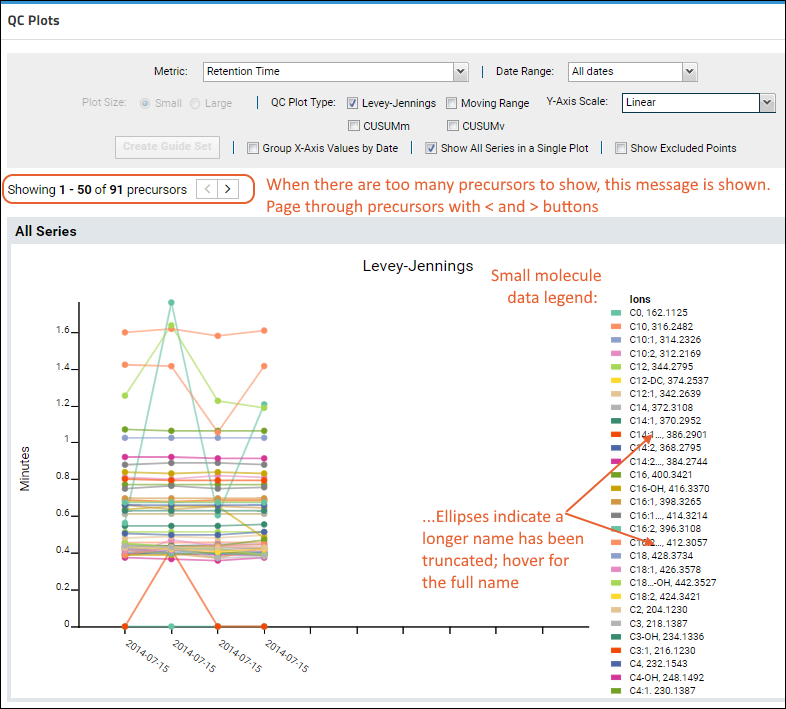 Note that the legend for this illegibly-dense plot does not list all 50 precursors.