Documentation: Version 20.7
Print Print Branch
By combining data from multiple tables in one grid view, you can create integrated grids and visualizations while avoiding duplication of data. The basis of joined grids is a "lookup column" -- a column that connects the two tables such that one table looks up values in another table, making it possible to join data from both tables in combined grids.

Once tables are connected by a lookup column, you can create a joined grid view on either table, subject to key complexity rules described below.For example, suppose you wish to create a grid that brings together columns from both the Demographics and the Languages tables. A lookup column has already been defined in the Demographics table that looks up data in the Language table. To create a grid including data from both tables: 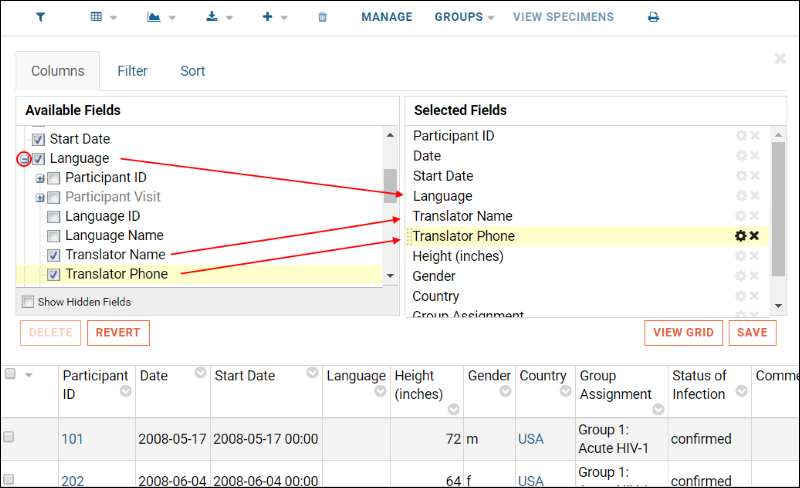 FAQ: In a study, why can't I customize my grid to show a particular field from another dataset?Background: To customize your grid view of a dataset by adding columns from another dataset, it must be possible to join the two datasets. The columns used for a dataset's key influence how this dataset can be joined to other tables. Certain datasets have more than one key column (in other words, a "compound key"). In a study, you will typically encounter three types of datasets: Consequences: When customizing the grid for a table, you cannot join in columns from a table with more key columns. For example, if you are looking at a clinical dataset in a study, you cannot join to an assay dataset because the assay dataset has more columns in its key, and thus can have multiple rows per participant/visit. So there isn't a unique mapping from a participant/visit pair in the 'originating' clinical dataset to a specific row of data in the assay dataset.Guidance: To create a grid view combining columns from disparate datasets, start with the dataset with more columns in the key. Then select a column from the table with fewer columns in the key. There can be a unique mapping from the compound key to the simpler one - some columns will have repeated values for several rows, but rows will be unique.