Documentation: Version 20.7
Print
Lookups give you the ability to link data from two different tables. For example, you can create a grid combining data from two tables by reference. One column pulls in data from another table and you can then display values from any column in that target (or "looked up") table. You can also take advantage of a lookup to simplify user data entry by constraining entered values for a column to a fixed set of values in another list.

Set Up a Lookup Field

To join these tables, an administrator adds a lookup column to the Demographics dataset definition using this interface: 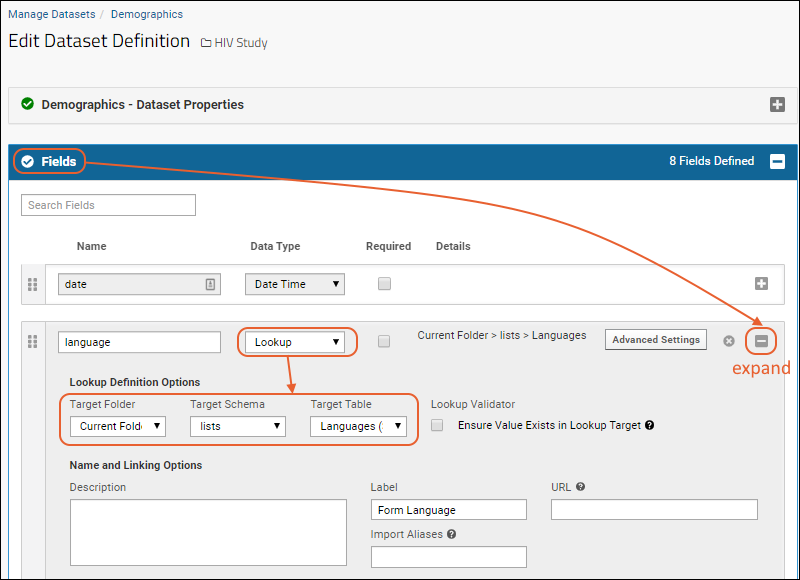 For lookup fields where the target table has an integer primary key, the server will use the first text field it encounters as the default display column. For example, suppose the Language field is an integer lookup to the Languages table, as below.

In this case, the server uses Language Name as the default display field because it is the first text field it finds in the looked up table. You can see this in the details of the lookup column shown in the example above, as "English", etc, are displayed though the lookup is to an integer key.

To display other fields from the looked up table, go to (Grid Views) > Customize View and select the fields you want to display.

You can also use query metadata to achieve the same result: see Query Metadata: Examples

When you are importing data into a table that includes a lookup column, you can have the system enforce the lookup values, i.e. any imported values must appear in the target table. An error will be displayed whenever you attempt to import a value that is not in the lookup's target table.To set up enforcement: