Documentation: Version 20.7
Print
This topic defines the entities in the Biologics registry, and their relationships to one another. You can access this information within the application by clicking See entity relationships at the top of the Registry page. 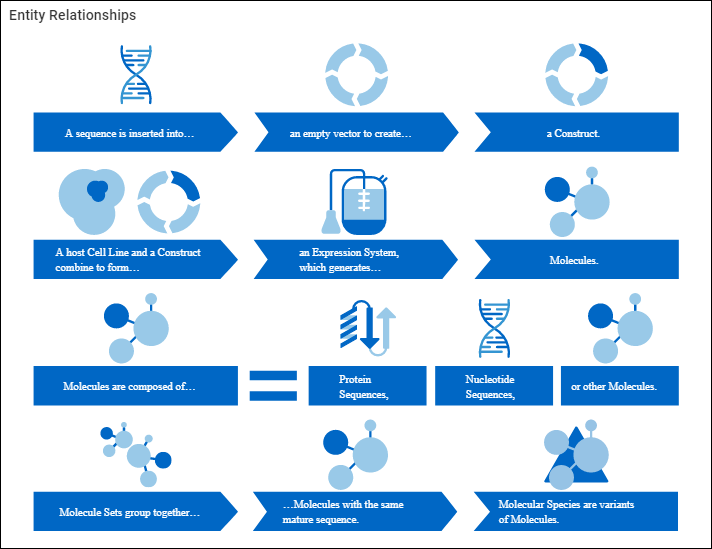 A Sequence is inserted into an empty Vector to create a Construct. A host Cell Line and a Construct combine to form an Expression System, which generates Molecules. Molecules are composed of Protein Sequences, Nucleotide Sequences, and/or other molecules. **Molecule Sets group together molecules with the same mature sequence. **Molecular Species** are variants of molecules.

Composed of a mixture of protein sequences, nucleotide sequences, chemistry elements, and other molecules. Generally, "molecule" refers to the target entity.

The set of molecules that only differ from one another in terms of their leader sequences. See Vectors, Constructs, Cell Lines, and Expression Systems.

After protein expression and other processes, all the entities that are detected for a particular molecule (different cleavage sites, post-translational modifications, genomic drift). See Vectors, Constructs, Cell Lines, and Expression Systems.

A single sequence comprised of nucleic acids, can be either DNA (A, T, G, C) or RNA (A, U, G, C).Along with being a component of a molecule, DNA sequences can be designed that encode for specific protein sequences when transferred into a cell line to create an expression system.

DNA molecule used as a vehicle to artificially carry foreign genetic material into another cell. The most common type of vector is a plasmid - a long double-stranded section of DNA that has been joined at the ends to circularize it. In molecular biology, generally, these plasmids have stretches of DNA somewhere in their makeup that allow for antibiotic resistance of some sort, providing a mechanism for selecting for cells that have been successfully transfected with the vector.

A vector (generally a plasmid) that has had a stretch of DNA inserted into it. Generally, this DNA insertion encodes for a protein of interest that is to be expressed.

A host cell line is transfected with a Construct, bringing the new DNA into the machinery of the cell. These transfected cells (called an Expression System) are then processed to select for cells that have been successfully transfected and grown up, allowing for the production of cells that have the construct and are manufacturing the protein of interest. At times, these transfections are transient and all of the cells are used in the process. Other times, a new stable cell line (still a Cell Line) is produced that can continue to be used in the future.

A combination of a Construct and a host cell