Documentation: Version 20.7
Print
Premium Feature — Available with all Premium Editions of LabKey Server. Learn more or contact LabKey.
Assay QC states can be defined for use in approval workflows. Users performing quality control checks can be granted the QC Analyst role and then assign states to runs, indicating progress through a workflow. Assay QC is supported for assays of the flexible, "general purpose" (or GPAT) type.This topic covers how to use Assay QC states that have been defined and enabled by an administrator. A QC Analyst user is any user assigned this role in addition to their reader or higher role in the container. These QC Analysts can set states on a per run basis. Assay QC states can vary by workflow. There is always a system "[none]" state, applied to new data by default. The administrator may configure a different default and the states used in your system. In this example, the example QC states used are "Not Yet Reviewed", "Reviewed - Passed", and "Reviewed - Failed".

QC Analyst users will see a QC State option on the runs grid for assays where it is enabled. To set (or change) a state for one or more rows: 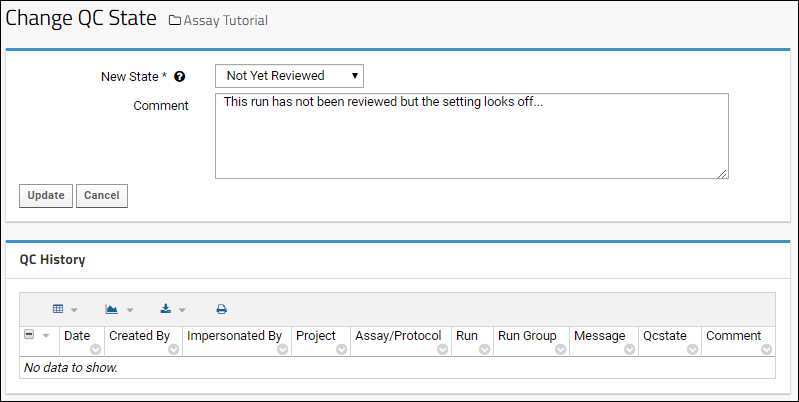 Once set, the setting will be shown in the QC Flags column. You can click it to see the associated comment or change the setting for that row.

Display Data Based on State

The visibility of runs, and the corresponding results, is controlled by the QC state setting and whether that state is configured to make the data "public". The "public" state means the data is visible to users who have Reader permission in the container. QC Analyst users can see all the data in a folder.For instance, the default "none" state does not show data to non-analyst users. When an administrator defines states, they elect whether data in that state is "public", meaning accessible to viewers that are granted access to the container.You can further customize displays using the grid view customizer and using the values in the QC Flags column.

Assay data can be integrated with related data about subjects under investigation by copying to a study. When Assay QC is in use, assays and studies must be in different folder containers, so the process involves copying assay data to the study folder.When using Assay QC states, data can only be copied to a study if it is in a public state according to the configuration of it's assigned QC state.If a user has admin or QC analyst permissions, and attempts to copy data that is not in a public QC state, they will see the error message: