Documentation: Version 21.11
Print
The LabKey Server code base includes extensive automated tests. These, combined with hands-on testing, ensure that the software continues to work reliably. There are three major categories of automated tests.

Unit tests exercise a single unit of code, typically contained within a single Java class. They do not assume that they run inside of any particular execution context. They are written using the JUnit test framework. Unit tests can be run directly through IntelliJ by right clicking on the test class or a single test method (identified with an @Test annotation) and selecting Run or Debug. They can also be run through the web application, as described below for integration tests. Unit tests are registered at runtime via the Module.getUnitTests() method.

Via command line: In the UI, access the junit-begin.view by editing the URL. For example, on a local development machine: You'll see a listing of tests available. Click to expand sections or use the Show All or Hide All buttons.

Click a single test name to run it, or use one of the Run All/Run BVT/Run DRT buttons. You'll see results when the tests are complete.

Integration tests exercise functionality that combines multiple units of code. They do not exercise the end-user interface. Integration tests are implemented using the JUnit test framework, like unit tests. They generally assume that they are running in a full web server execution context, where they have access to database connections and other resources.They can be invoked in the UI by going to the same junit-begin.view URL as unit tests. Ex: Integration tests are registered at runtime via the Module.getIntegrationTests() method.

Functional tests exercise the full application functionality, typically from the perspective of an end-user or simulated client application. Most functional tests use the Selenium test framework to drive a web browser in the same way that an end user would interact with LabKey Server. Unlike unit and integration tests, functional tests treat the server as a black-box. They run independently and are built independently of LabKey Server (though some of them share source code repositories).Functional tests are organized into various test suites, including the Developer Regression Tests (DRT), Build Verification Tests (BVT), Daily suites, and numerous module-specific suites. LabKey's Continuous Integration system runs these suites at varying frequencies in response to code changes.

You can specify various properties to customize test execution. These properties are defined and described in server/testAutomation/test.properties and can be overridden by modifying that file or adding -Pprop=value to gradle commands. When setting up a develop machine, the ijConfigure gradle task will generate the "test.properties" file from "test.properties.template".Before updating an existing enlistment to 21.10 (or later), backup your 'test.properties' to avoid losing existing customizations.

To run the tests, you will need to install browser drivers manually, and either place them in your PATH or specify the locations in your test.properties file via the properties specified below.

After setting up your development machine, you should have the core test repository cloned to $LABKEY_HOME/server/testAutomation.You have several options for running functional tests on a development machine where LabKey Server is running locally: The following are relevant Gradle tasks and command line options available:

Run Tests for an Individual Module

Many modules define a test suite that can be run using the suite parameter. (e.g. ./gradlew :server:test:uiTests -Psuite=targetedms). Alternatively, you can run tests based on their source code location. Gradle brings with it the ability to do very targeted builds and tasks, thus we have the ability to run the tests for a particular module without using the test runner project.Until we resolve the issue of making the test runner able to run tests from all modules while still allowing the individual tests to be run, you must set the project property enableUiTests in order to be able to run the tests for an individual module.For any module that has its own test/src directory, there will be a `moduleUiTests` task so you can run only the tests for only that module. For example, you can run the tests for MS2 by using this command:
Note: It is still required that you have the :server:testAutomation project since that is the location of the test.properties file and the helper methods for running tests.

Use the IntelliJ "Debug Selenium Tests" configuration to connect (instead of "LabKey Dev"). You can run tests from within IntelliJ, by right clicking the class or an '@Test' annotated method. This will ensure that the debugger will attach.

When setting up a new enlistment configure the test to run using the IntelliJ and not gradle. This setting should be applied by default with the IntelliJ config files checked into the enlistment. You can confirm by selecting Settings/Preferences > Build, Execution Deployment > Build Tools > Gradle. The Run test using: option should be "IntelliJ IDEA": 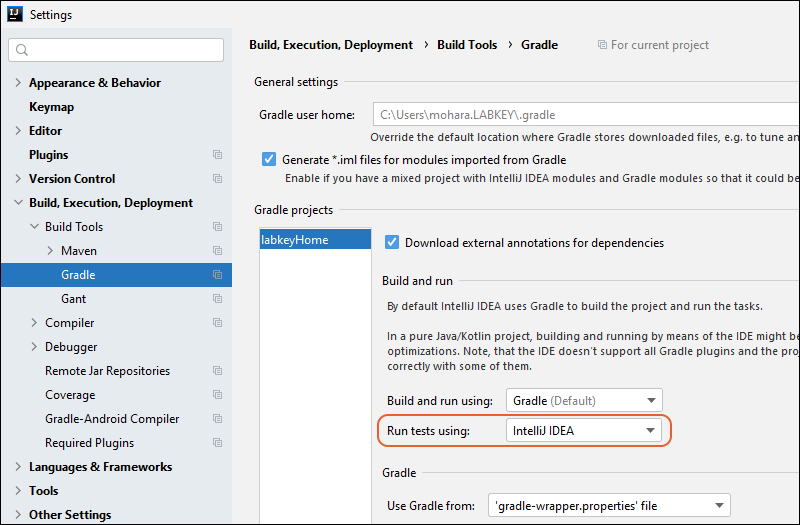 IntelliJ's auto-import can sometimes pick up the wrong Assert class: 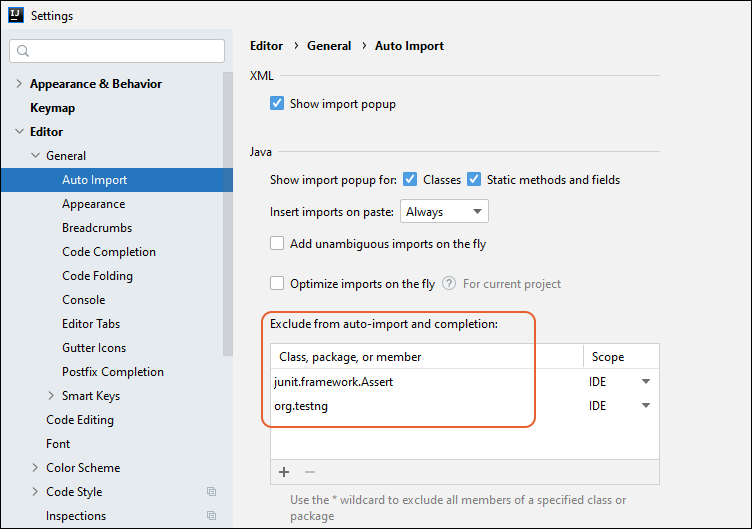