Documentation: Version 22.3
Print
The process of building and deploying LabKey Server from source is covered in this topic.

These are the various directories involved in the build process, listed in the order in which they are used in the build process: The table below shows the commands used to create, modify and delete the various directories. Since various commands depend on others, there are generally several commands that will affect a given directory. We list here only the commands that would be most commonly used or useful. One of the key things to note here is the cleanBuild command removes the entire build directory, requiring all of the build steps to be run again. This is generally not what you want or need to do since Gradle's up-to-date checks should be able to determine when things need to be rebuilt. (If that does not seem to be the case, please file a bug.) The one exception to this rule is when we change the LabKey version number after a release. Then you need to do a cleanBuild to get rid of the artifacts with the previous release version in their names.

Source code is built into jar files (and other types of files) in a module's build directory. The result is a .module file, which contains potentially several jar files as well as other resources used by the module. This .module file is copied from the module's build directory into the staging directory and from there into the deploy directory. This is all usually accomplished with the './gradlew deployApp' command. The 'deployApp' task also configures and copies the labkey.xml tomcat context file. This file points to the deploy directory as a context path for Tomcat. Changes in that directory will therefore be noticed by Tomcat and cause it to reload the application. 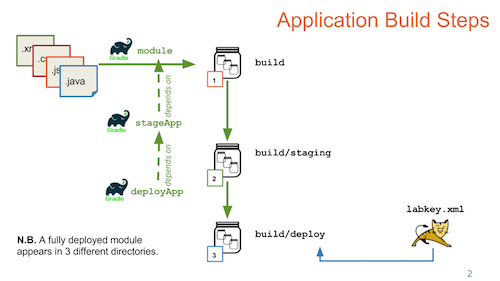 A single module is deployed using the `./gradlew deployModule' command. This command will create a .module file in the module's build directory, then copy it first into the staging modules directory and then into the deploy modules directory. 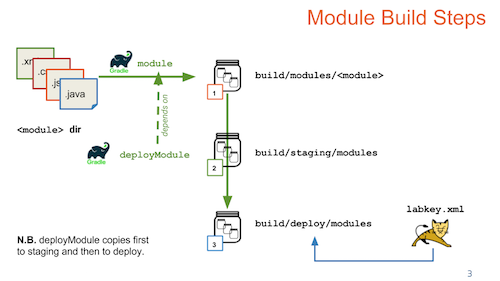 A few important targets:Gradle targets can also be invoked from within IntelliJ via the "Gradle projects" panel, but this has not been widely tested.

To improve performance, the LabKey build is configured by default to use Gradle's parallel build feature. This is controlled by these properties in the <LABKEY_ROOT>/gradle.properties file:By changing these properties, you can turn off parallel builds or adjust the number of threads Gradle uses.If Gradle warns that "JVM heap space is exhausted", add more memory as described in the topic Gradle Tips and Tricks.