Documentation
Print Print Branch
Transform scripts are attached to assay designs, run before the assay data is imported, and can reshape the data file to match the expected import format. Several scripts can run sequentially to perform different transformations. The extension of the script file identifies the scripting engine that will be used to run the validation script. For example, a script named test.pl will be run with the Perl scripting engine.
Transform scripts (which are always attached to assay designs) are different from trigger scripts, which are attached to a dataset (database table or query).

A wide range of scenarios can be addressed using transform scripts. For example:

Any scripting language that can be invoked via the command line and has the ability to read/write files is supported for transformation scripts, including: Before you can run scripts, you must configure the necessary scripting engine on your server. If you are missing the necessary engine, or the desired engine does not have the script file extension you are using, you'll get an error message similar to:

Transformation and validation scripts are invoked in the following Script Execution Sequence:1. A user imports assay result data and supplies run and batch properties.2. The server uses that input to create: 3. The server invokes the transform script, which can use the ${runInfo} substitution token to locate the "runProperties.tsv" file created in step 2. The script can then extract information and paths to input and output files from that file.4. After script completion, the server checks whether any errors have been written by the transform script and whether any data has been transformed.5. If transformed data is available, the server uses it for subsequent steps; otherwise, the original data is used.6. If multiple transform scripts are specified, the server invokes the other scripts in the order in which they are defined.7. Field-level validator and quality-control checks, including range and regular expression validation that are included in the assay definition are performed on the 'post-transformation' data.8. If no errors have occurred, the run is loaded into the database.

Each assay design can be associated with one or more validation or transform scripts which are run in the order listed in the assay design.
This section describes the process of using a transform script that has already been developed for your assay type. An example workflow for how to create an assay transform script in perl can be found in Example Workflow: Develop a Transformation Script.

Identify the Path to the Script File 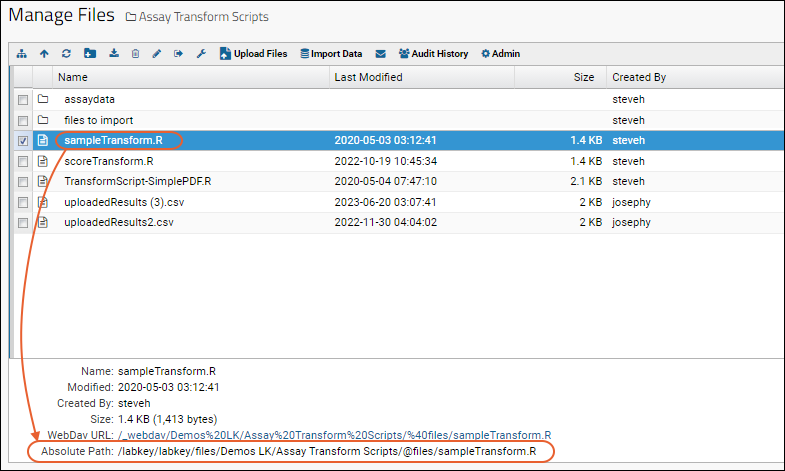 In the file path, LabKey Server accepts either backslashes (the default Windows format) or forward slashes.Example path to script: When working on your own developer workstation, you can put the script file wherever you like, but putting it within the File Repository will make it easier to deploy to a production server. It also makes iterative development against a remote server easier, since you can use a Web-DAV enabled file editor to directly edit the same script file that the server is calling.When you decide where to locate your transform script file, consider that it is convenient to keep script files in the same location as the assay. You will enter the full path when you configure your assay design to run this script. Use the built-in substitution token "${srcDirectory}" which the server automatically fills in to be the directory where the called script file (the one identified in the Transform Scripts field) is located.

The primary mechanism for communication between the LabKey Assay framework and the Transform script is the Run Properties file. Again a substitution token ${runInfo} tells the script code where to find this file. The script file should contain a line likeThe run properties file contains three categories of properties:1. Batch and run properties as defined by the user when creating an assay instance. These properties are of the format: <property name> <property value> <java data type>for example,An example Run Properties file to examine: runProperties.tsvWhen the transform script is called these properties will contain any values that the user has typed into the "Batch Properties" and "Run Properties" sections of the import form. The transform script can assign or modify these properties based on calculations or by reading them from the raw data file from the instrument. The script must then write the modified properties file to the location specified by the transformedRunPropertiesFile property.2. Context properties of the assay such as assayName, runComments, and containerPath. These are recorded in the same format as the user-defined batch and run properties, but they cannot be overwritten by the script.3. Paths to input and output files. These are absolute paths that the script reads from or writes to. They are in a <property name> <property value> format without property types. The paths currently used are:

Assuming that the system successfully infers a TSV file/runDataFile, the transform script developer can choose to use either the runDataFile or the runDataUploadedFile as its input. The runDataFile would be the right choice for an Excel-format raw file. By using the runDataFile, the assay framework does the Excel-to-TSV conversion and the script doesn't need to know how to parse Excel files. The runDataUploadedFile would be the right choice if, for example, the original file is already in TSV format or when the conversion process does not produce a useable TSV file.A Python example that loads the original imported results file...… and one that loads the inferred TSV file 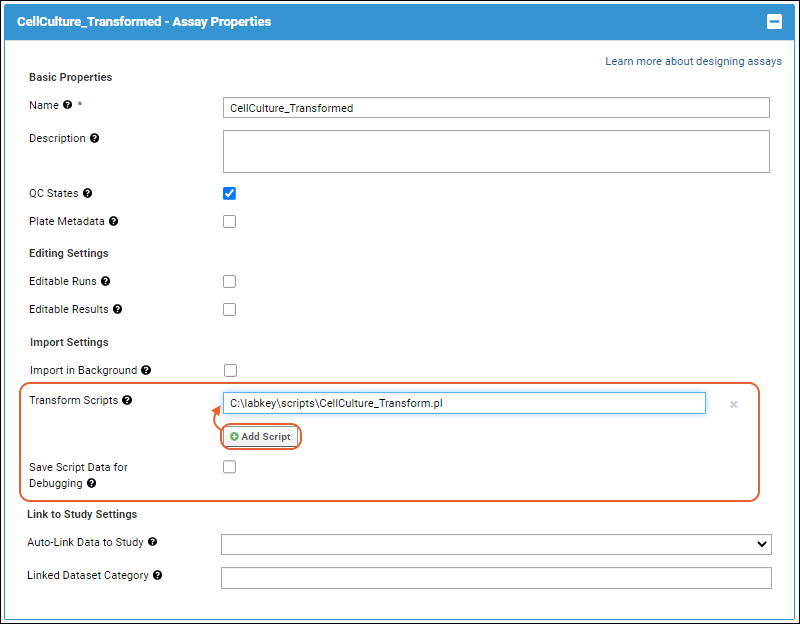 When you import (or re-import) run data using this assay design, the script will be executed.There are two useful options presented as checkboxes in the Assay designer. A few notes on usage: The general purpose assay tutorial includes another example use of a transform script in Set up a Data Transform Script.