Documentation
Print
This topic is under construction.

You are a researcher who is studying the effects of different treatment regimens on HIV. You have assembled a team of colleagues to help you do the work. The team is divided into different roles: nurses, lab technicians, data assemblers, data analysts, etc. To ensure no bias creeps into the results, you want the study to be "blinded", that is, you want the study subjects, the study managers, and the data assemblers to be unaware of which treatments are being administered to which subjects.The following tutorial shows one way to blind study managers using LabKey's study features.In short, the blinding technique described below denies team members access to the dataset which holds the cohort assignments, including any queries and visualizations that make use of the cohort assignments. Note that this technique is one of many possible solutions to the problem. See the last section of this topic for other ways to achieve a blinded study.

(One Way to) Set Up Cohort Blinding 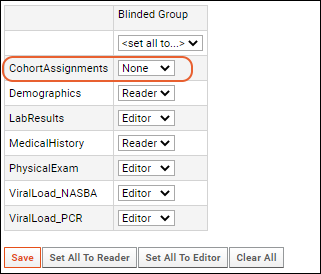 The solution above is just one way to achieve blinded studies. Other options include:
Discussions